This sale is for …und deine Liebe auch (1962) with English Subtitles on DVD.

6.5
Director: Frank VogelWriters: Paul WiensStars: Armin Mueller-Stahl, Kati Székely, Ulrich TheinSummary: On August 13th, 1961-the night that the Berlin Wall goes up-three people must make a decision that will change their lives forever.... Upon learning of the building of the Wall, the director and scriptwriter changed the story they were working on to center it on this historic event. For four months a small team filmed with mobile cameras on the streets of East Berlin, capturing both its ordinary life and the extraordinary atmosphere of the period with precision and humor. Although the Wall itself would later become a taboo subject for East German filmmakers, And Your Love Too deals openly with the topic. The role of the border guard was one of the first major parts played by Academy Award nominee Armin Mueller-Stahl (Shine, Angels & Demons). Written by DEFA Film Library
Also known as: ...und deine Liebe auch (on a region-free DVD). 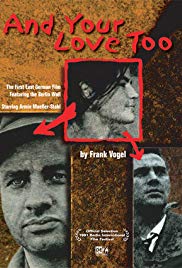