Twilight Zone: The Movie (1983) with English Subtitles on DVD


This sale is for Twilight Zone: The Movie (1983) with English Subtitles on DVD.

Director: Joe Dante, John LandisWriters: John Landis, George Clayton JohnsonStars: Dan Aykroyd, Albert Brooks, Vic MorrowSummary: Prologue: a driver has a big surprise with his passenger. Segment 1 ("Time Out"): a bigot man hates Jews, Black and Asian people. One day he will live in the World War II, hunted down by KKK and attacked in Vietnam War and feel the effects of his hatred. Segment 2 ("Kick the Can"): In a nursing home, the elder inhabitants learn that their minds can keep them young. Segment 3 ("It's a Good Life"): a traveler hits a boy in a bicycle with her car and takes the boy home. Soon she learns that the powerful boy brought her home indeed. Segment 4 ("Nightmare at 20,000 feet"): a writer is scared to fly and soon he sees a monstrous creature destroying the airplane engines during a stormy night. Written by Claudio Carvalho, Rio de Janeiro, Brazil
Also known as: Twilight Zone: The Movie (on a region-free DVD).

Be the first to review “Twilight Zone: The Movie (1983) with English Subtitles on DVD” Cancel reply 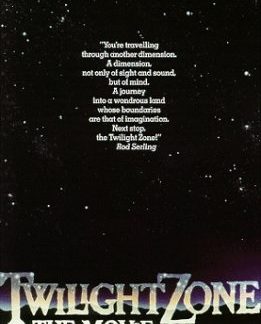