This sale is for Twice-Told Tales (1963) starring Vincent Price on DVD.

Director: Sidney SalkowWriters: Nathaniel Hawthorne, Robert E. KentStars: Vincent Price, Sebastian Cabot, Brett HalseySummary: Three horror stories based on the writings of Nathaniel Hawthorne. In the first story titled "Dr. Heidegger's Experiment", Heidegger attempts to restore the youth of himself, his fiancee and his best friend. In "Rappaccini's Daughter", Vincent Price plays a demented father inoculating his daughter with poison so she may never leave her garden of poisonous plants. In the final story "The House of the Seven Gables", the Pyncheon family suffers from a hundred year old curse and the Pyncheon brother returns to his home to search for a hidden vault. Written by Dylan Conner, Donna Jolly
Also known as: Twice-Told Tales (on a region-free DVD). 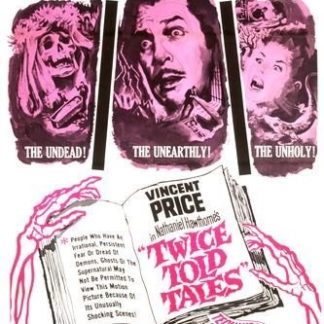