This sale is for Topeka (1953) starring Bill Elliott on DVD.

7.5
Director: Thomas CarrWriters: Milton RaisonStars: Bill Elliott, Phyllis Coates, Rick VallinSummary: After a series of bank robberies, Jim Levering (Bill Elliott) as Wild Bill Elliott) and his gang decide to hide out for awhile in Deer Creek where bard-and-casino owner Mack Wilson (Harry Lauter)) is the overlord. Wilson runs a protection racket and the town merchants have to pay him to keep operating. Jim moves in, planning to eventually take over Wilson's racket for himself. He and his men whip Wilson's gang and all but drive them out of the town and territory, and Jim wins the respect of the community. When he is made sheriff, he and his pal Ray Hammond (Rick Vallin)) decide to keep going straight. The rest of Jim's old gang join Wilson's outfit and proceed to loot the town. Jim and Ray go into action and the outlaws are either killed or jailed. The townspeople petition the governor for a pardon for both of them. Written by Les Adams <[email protected]>
Also known as: Topeka (on a region-free DVD). 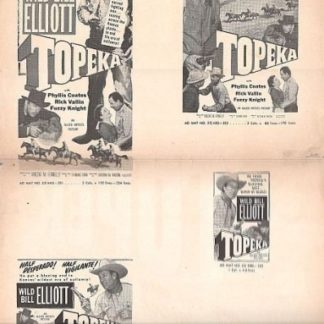