This sale is for Tokyo Blood (1993) with English Subtitles on DVD.

7.1
Director: Gakuryû IshiiWriters: Gakuryû Ishii, Isamu UnoStars: Mai Hosho, Hairi Katagiri, Masashi KojimaSummary: Tokyo Blood is an anthology film consisting of four experimental shorts directed by Gakuryû Ishii "formerly known as Sogo Ishii" thematically connected by the theme of entrapment in Tokyo's urban landscape and desire to escape. The opening film, "Street Noise" is an impressionistic audio/visual collage depicting an anonymous salaryman's state of mind as he breaks down from sensory overload. The second vignette, "Bicycle" follows the journey of two young strangers bonded by alienation who aimlessly explore the city by bike after a chance encounter. The third chapter begins as a parody of structuralist film theory "not unlike early works by Peter Greenaway" but soon descends into the hyper-kinetic chaos reminiscent of films by fellow Japanese avant-garde director Shinya Tsukamoto "The Tetsuo Trilogy". The concluding film, "Heart of Stone" is seemingly a transmission from a post-human feature combining the styles of Chris Marker's essay films and Craig Baldwin's found-footage narratives. Written by Mia Kolymvitria Kineza
Also known as: Tokyo Blood (on a region-free DVD). 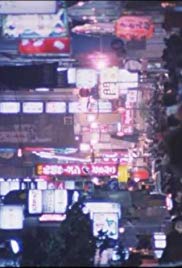