This Man Is Mine (1934) starring Irene Dunne on DVD


This sale is for This Man Is Mine (1934) starring Irene Dunne on DVD.

6.1
Director: John CromwellWriters: Jane Murfin, Anne Morrison ChapinStars: Irene Dunne, Constance Cummings, Ralph BellamySummary: Traveling among the upper class upstate New York scene, Tony and Jim Dunlap are happily married with a son, two year old Jeremy Dunlap. Most of their friends see Tony as the perfect wife in her unending support of Jim. What could rock their world is that Jim's ex-fiancée, proverbial man eater Fran Harper, the sister of one of their friends Jud McCrae, he and his wife Bee McCrae who don't much like her, has just gotten a Reno divorce and is said to be on her way back to cause trouble as Fran has not yet made the divorce public, but once it hits the media, it will lead to a circus atmosphere for Jim and by association Tony in the scandal all over again of Fran having left Jim at the altar six years ago, the full story of which Tony is unaware. Fran does end up coming back, bringing along with her a poor cad named Mort Holmes, who she picked up at a speakeasy along the way. Fran has indeed come back to cause trouble, more specifically to steal Jim away from Tony for her own selfish ... Written by Huggo
Also known as: This Man Is Mine (on a region-free DVD). 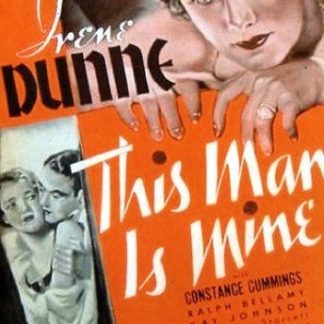