Director: George WaggnerWriters: Curt SiodmakStars: Claude Rains, Warren William, Lon Chaney Jr.Summary: Upon the death of his brother, Larry Talbot returns from America to his ancestral home in Wales. He visits a gypsy camp with village girl Jenny Williams, who is attacked by Bela, a gypsy who has turned into a werewolf. Larry kills the werewolf but is bitten during the fight. Bela's mother tells him that this will cause him to become a werewolf at each full moon. Larry confesses his plight to his unbelieving father, Sir John, who then joins the villagers in a hunt for the wolf. Transformed by the full moon, Larry heads for the forest and a fateful meeting with both Sir John and Gwen Conliffe. Written by Doug Sederberg <[email protected]>
Also known as: The Wolf Man (on a region-free DVD).

Be the first to review “The Wolf Man (1941) starring Lon Chaney Jr. on DVD” Cancel reply 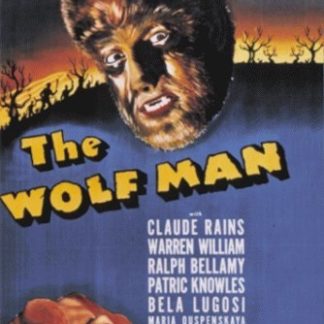