This sale is for The Wind Cannot Read (1958) starring Dirk Bogarde on DVD.

6.2
Director: Ralph ThomasWriters: Richard MasonStars: Dirk Bogarde, Yôko Tani, Ronald LewisSummary: During World War II, the Japanese forces push their way into Burma and threaten to invade British India at the end of 1942. Caught in a flood of war refugees fleeing Burma, R.A.F. Flight Lieutenant Michael Quinn (Sir Dirk Bogarde) and a fellow Officer are retreating toward the Burma-India border. The disorganized column marching under the intense scorching sun runs into a Japanese ambush. Under a hail of fire, they all scatter in all directions. Quinn and his comrade head for the desert. After a few gruelling hours of walking in the infernal desert, they finally reach a British Army outpost. In 1943, Quinn is sent for a bit of rest and relaxation. He's spending his time skiing in the Indian mountains and relaxing at the New Everest Hotel where his Indian orderly, Bahadur (Marne Maitland), constantly spoils him. Fellow R.A.F. Flying Officer Peter Munroe (John Fraser) shows up at the hotel and informs Quinn that no one is leaving for Britain yet. Munroe also tells Quinn that the two of ... Written by nufs68
Also known as: The Wind Cannot Read (on a region-free DVD). 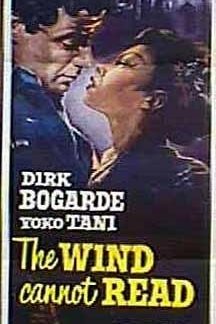