The Wildman of Kentucky: The Mystery of Panther Rock (2008) starring Matt Clark on DVD


This sale is for The Wildman of Kentucky: The Mystery of Panther Rock (2008) starring Matt Clark on DVD.

4.0
Director: O.H. KrillWriters: Philip SpencerStars: Matt Clark, Philip Gardiner, O.H. KrillSummary: There is probably no other unknown creature that arouses more curiosity than the Bigfoot or Sasquatch. Yes, there is the Loch Ness Monster, the Chupacabra and other great beasts of Lore but the Bigfoot remains the most compelling as it pulls us towards ourselves... shadowing the unknown X factor of our very origins. The case files contain thousands of reported sightings, yet no actual specimen has ever been found. Hundreds of photographs exist, but the creature has not been identified. Still, the clues accumulate year after year. In the words of one Bigfoot investigator,"It is an extremely complex phenomenon with no starting point and few geo-graphical limits." If this creature does exist then it most certainly must be a relative of man. Species? Unknown at this time. In the heart of Kentucky there is an ancient and sacred ground known as Panther Rock. For many years tales of strange events have been reported but never investigated in full. Now, for the first time an intrepid group of... Written by Anonymous

Be the first to review “The Wildman of Kentucky: The Mystery of Panther Rock (2008) starring Matt Clark on DVD” Cancel reply 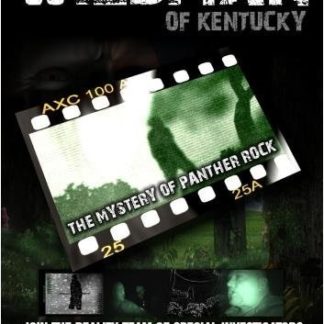