This sale is for The Weather Underground (2002) starring Lili Taylor on DVD.

Director: Sam Green, Bill SiegelStars: Lili Taylor, Pamela Z, Jim LangeSummary: In the late 1960s and early 1970s polarization of American political situation was becoming acute, with the Vietnam War abroad and civil rights at home being the most pressing issues. For the youth political movement, seemingly ineffectual methods of peaceful protest and resistance led to the rise of a faction that wanted a more extreme approach that the government could not ignore. One particular group, the Weather Underground, attempted to team up with the Black Panthers to violently confront the US government. They began with participation in street riots, and escalated their efforts to include the bombing of specific targets associated with the government or local power structures. Through archival footage and interviews of participants on both sides of this conflict, this film covers the Weather Underground's campaign of violence through this period, the FBI's strategies and tactics to apprehend them (including some deemed unethical or illegal), until changing times and ... Written by Kenneth Chisholm ([email protected]) 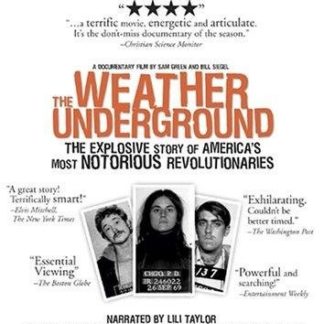