The Weapons of Death (1981) starring Eric Lee on DVD


This sale is for The Weapons of Death (1981) starring Eric Lee on DVD.

4.5
Director: Paul KyriaziWriters: Paul KyriaziStars: Eric Lee, Bob Ramos, Ralph CastellanosSummary: In San Francisco's Chinatown, Eric runs a martial arts school. His skills come in handy when a band of thugs kidnaps his half-sister for a large Chinese gang. The head thug took the job because he has a score to settle with the girl's father. The Chinese gang wants ransom money from the girl's mother, who, despite living modestly, has enough to pay it. Eric gathers a team of expert fighters from his school and goes off to get the girl back. But emotions run high when the team is joined by the father who had left his family years ago. Later, they'll be joined by a kidnapper with a conscience. In the hills, the girl escapes and gets recaptured several times. The hills are teeming not only with the members of the Chinese gang, but with female assassins and cruel bikers, too. Written by J. Spurlin
Also known as: The Weapons of Death (on a region-free DVD). 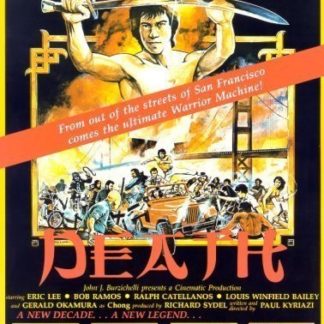