The Tragedy of Flight 103: The Inside Story (1990) starring Ned Beatty on DVD

7.1
Director: Leslie WoodheadWriters: Michael EatonStars: Ned Beatty, Peter Boyle, Harry DitsonSummary: On December 21, 1988, Pan American Airways flight 103, a Boeing 747 carrying 259 people on a London-New York flight, was brought down by a bomb over Lockerbie, Scotland, killing all on board, plus 11 people on the ground. This film goes back several years before the bombing, starting with Pan Am's botched "Alert" safety program to boost public confidence. Then, the accidental downing of an Iranian airliner by a US Navy warship pushed an extremist group to prepare a counter-attack, with a bomb disguised as a radio cassette player... while "Alert" is not heeding to the numerous safety concerns. Written by Sergio Ortega
Also known as: The Tragedy of Flight 103: The Inside Story (on a region-free DVD).

Be the first to review “The Tragedy of Flight 103: The Inside Story (1990) starring Ned Beatty on DVD” Cancel reply 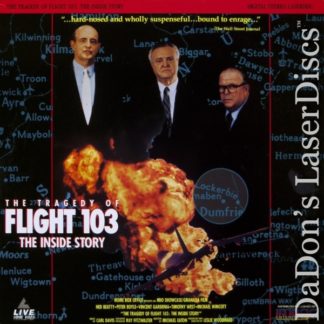