The Taming of the Shrew (1929) starring Mary Pickford on DVD


This sale is for The Taming of the Shrew (1929) starring Mary Pickford on DVD.

6.3
Director: Sam TaylorWriters: William Shakespeare, Sam TaylorStars: Mary Pickford, Douglas Fairbanks, Edwin MaxwellSummary: In sixteenth century Padua, Hortensio loves Bianca, the youngest daughter of Baptista. But Baptista will not allow the two to get married until his eldest daughter, the extremely headstrong Katherine, is betrothed. This task seems impossible because of Katherine's shrewish demeanor. They believe their prayers have been answered with the arrival from Verona of the lusty Petruchio, whose father has just passed, leaving him to travel the world and marry. Having not yet met her, Petruchio agrees to court Katherine when he is told of her beauty and wit. Petruchio is even more excited at the prospect of marrying this wildcat of a woman after meeting her. Katherine will have none of it, even if it means her sister's spinsterhood, but has no choice but to marry him. Beyond the fact of the marriage itself, Katherine is even more irked by Petruchio's less than conventional behavior at the ceremony and post ceremony bridal feast. Each starts to play what they consider sly games of oneupsmanship ... Written by Huggo
Also known as: The Taming of the Shrew (on a region-free DVD). 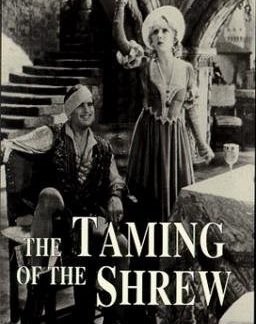