The Strange Case of Dr. Jekyll and Miss Osbourne (1981) with English Subtitles on DVD


This sale is for The Strange Case of Dr. Jekyll and Miss Osbourne (1981) with English Subtitles on DVD.

6.2
Director: Walerian BorowczykWriters: Walerian Borowczyk, Robert Louis StevensonStars: Udo Kier, Marina Pierro, Patrick MageeSummary: The film takes place before, during and immediately after the engagement party of Dr.Henry Jekyll and Miss Fanny Osborne, attended by numerous highly respectable guests (a general, a doctor, a priest, a lawyer), the last of which informs the company that a child has been murdered in the street outside. While the others watch a young dancer perform, Dr.Jekyll instructs the lawyer to alter his will, leaving everything to a certain Mr.Hyde. Shortly afterwards, the dancer is found murdered, and the guests realise that one of their number must be a maniac with a prodigious sexual appetite... Written by Michael Brooke <[email protected]>
Also known as: The Strange Case of Dr. Jekyll and Miss Osbourne (on a region-free DVD).

Be the first to review “The Strange Case of Dr. Jekyll and Miss Osbourne (1981) with English Subtitles on DVD” Cancel reply 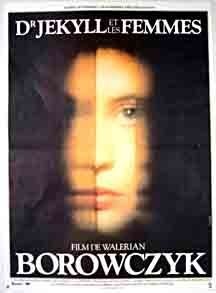