This sale is for The Story of Rock ‘n’ Roll Comics (2005) starring Alice Cooper on DVD.

Director: Ilko DavidovWriters: Ilko DavidovStars: Alice Cooper, Steven Crompton, Deena DaseinSummary: The controversial publisher of unauthorized comic book biographies of rock stars, Todd Loren, was praised by some (Gene Simmons, Jerry Garcia, Nick Mason) and threatened with law suits by others (Axl Rose, Bon Jovi, Skid Row). But the California Supreme Court ruled that Rock'N'Roll Comics was protected by the First Amendment, and Todd could continue publishing. His mysterious murder more than thirteen years ago has remained unsolved with suspicions that he had been killed by Andrew Cunanan, the murderer of Gianni Versace. BulletProof Film's innovative documentary mixes hilarious animation and eerie home video of Todd with interviews that reflect the divergent opinions about him and his legacy. Characters from the comic book world interviewed in the film include Mary Fleener, Dennis Worden, Robert Williams, Denis Kitchen, Gary Groth, and Steve Crompton, along with British music critic Ian Shirley (author of Can Rock and Roll Save the World?) and reflections on the mix of Rock'N'Roll ... Written by Carmine Cervi
Also known as: The Story of Rock 'n' Roll Comics (on a region-free DVD). 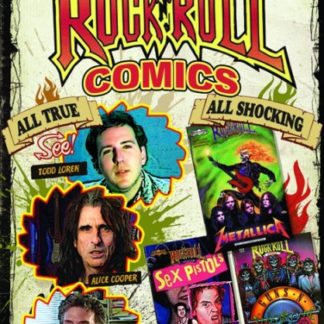