This sale is for The Stickup (2002) starring James Spader on DVD.

Director: Rowdy HerringtonWriters: Rowdy HerringtonStars: James Spader, Leslie Stefanson, David KeithSummary: It's a quiet little town where nothing happens - until the day the bank is hit for half a million dollars of Indian casino money by a thief wearing a clowns mask. From here the story follows a dangerous game of cat-and-mouse between bank robber and former cop Parker (James Spader) and small-town police officer Ray DeCarlo (David Keith) determined to catch him. Parker doesn't help himself by holing up with a nurse who happens to be DeCarlo's former wife. Throw in a rookie FBI agent, Indians who want their money back, some former friends of Parker who are not so friendly anymore and his fate seems sealed. Written by Anonymous
Also known as: The Stickup (on a region-free DVD). 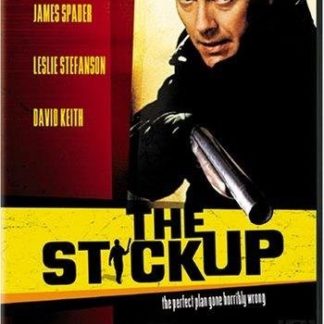