This sale is for The Steel Trap (1952) starring Joseph Cotten on DVD.

6.9
Director: Andrew L. StoneWriters: Andrew L. StoneStars: Joseph Cotten, Teresa Wright, Jonathan HaleSummary: A Bank officer discovers a flaw in the U.S. extradition treaty with Brazil and decides to take advantage of it. On Friday, he steals a million dollars from the bank, knowing it won't be missed until the bank opens on the following Monday. He and his wife, who doesn't know what he has done, then take a flight to Brazil. After some difficulties, they get as far as New Orleans, where his wife discovers the reason for their flight and what he has done. She leaves him and returns home. He is now alone with his conscience, and doesn't know if he can get back and return the money to the bank's vault before the start of business on Monday. Written by Les Adams <[email protected]>
Also known as: The Steel Trap (on a region-free DVD). 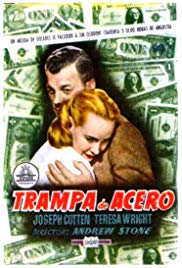