This sale is for The Spider (1945) starring Richard Conte on DVD.

6.0
Director: Robert D. WebbWriters: Lowell Brentano, Irving Cummings Jr.Stars: Richard Conte, Faye Marlowe, Kurt KreugerSummary: An ex-cop who is now a private detective is hired by a woman to be the go-between in retrieving an important envelope from her partner. The detective has the partner come to his apartment to give him the envelope, but someone sneaks into his apartment and strangles her while the detective is in another room. Fearful that the police will suspect him of the murder, he brings the woman's body back to her own apartment, but the police find out and suspect him of the murder anyway. He must find out who is framing him for the murder and why, before the police catch him. Written by [email protected]
Also known as: The Spider (on a region-free DVD). 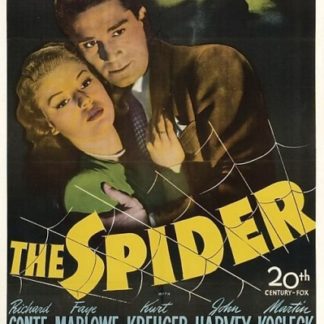