The Singer Not the Song (1961) starring Dirk Bogarde on DVD


This sale is for The Singer Not the Song (1961) starring Dirk Bogarde on DVD.

6.4
Director: Roy Ward BakerWriters: Audrey Erskine-Lindop, Nigel BalchinStars: Dirk Bogarde, John Mills, Mylène DemongeotSummary: During the 1950s, in a small isolated Mexican village, the local Roman Catholic priest, Father Gomez (Leslie French), is an older man with a broken spirit. During his tenure in the village of Quantano, he fought hard to keep his flock of parishioners, in spite of threats and intimidation from the part of local bandit Anacleto Comachi (Sir Dirk Bogarde) and his men. The atheistic bandit has imposed his tyrannical rule over the region for many years. The local Police cannot find any witnesses to come forward and testify to any wrongdoing from the part of Anacleto. Therefore, they cannot charge him or arrest him. The Catholic Church replaces Father Gomez with a younger, more energetic priest, Father Keogh (Sir John Mills) from Ireland. Before departing the village, Father Gomez warns Father Keogh of the dangers of defying Anacleto Comachi's authority. But Father Keogh openly defies the bandit and administers his daily priestly duties at the village church. He even manages to persuade ... Written by nufs68
Also known as: The Singer Not the Song (on a region-free DVD). 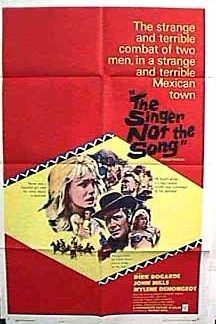