This sale is for The Saddest Music in the World (2003) with English Subtitles on DVD.

Director: Guy MaddinWriters: Kazuo Ishiguro, George TolesStars: Isabella Rossellini, Mark McKinney, Maria de MedeirosSummary: It's the winter of 1933 in Winnipeg. In honor of Winnipeg being named the sorrow capital of the world for the Depression era for the fourth year running by the London Times, Lady Helen Port-Huntley, the legless owner of Winnipeg's Port-Huntley Beer, is hosting and judging a contest to see which nation has the saddest music in the world, the winner to take home a $25,000 prize. Seeing as to the current Prohibition in the United States, Lady Port-Huntley has ulterior motives for the contest. Father and son, streetcar conductor Fyodor Kent and New York based musical producer Chester Kent, who both have a past connection to Lady Port-Huntley (Fyodor, a WWI veteran and former doctor, has fashioned for her an unusual pair of artificial legs apropos to her business), want to represent Canada and the United States respectively in the contest. Despite Lady Port-Huntley's hatred for the Kent's, she does allow them to do so if only to advance her own priorities. As the contest takes place, the ... Written by Huggo
Also known as: The Saddest Music in the World (on a region-free DVD). 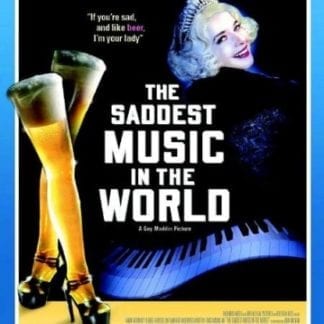