The Respectful Whore (1952) with English Subtitles on DVD


This sale is for The Respectful Whore (1952) with English Subtitles on DVD.

6.6
Director: Charles Brabant, Marcello PaglieroWriters: Alexandre Astruc, Jacques-Laurent BostStars: Barbara Laage, Ivan Desny, Walter BryantSummary: Fred, the nephew of a senator,has murdered a Black man on a train. The two only witnesses are Lizzie McKay, a prostitute from New York, and Sidney, a colored man. Fred decides to seduce Lizzie in order to make her give false evidence according to which Sidney has attempted to rape her. The uncle also puts pressure on the young woman. After much hesitation, Lizzie finally accepts but Sidney, who has nearly got lynched, takes refuge at her home... Written by Guy Bellinger
Also known as: The Respectful Whore (on a region-free DVD). 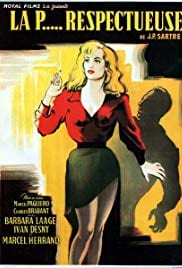