The Raid (1977) with English Subtitles on DVD


This sale is for The Raid (1977) with English Subtitles on DVD.

5.0
Director: Atif YilmazWriters: Türker Inanoglu, Erdogan TünasStars: Cüneyt Arkin, Necla Nazir, Ekrem BoraSummary: Murat runs a casino. He has promised his pregnant wife Nilgun that he would give up this business. Inspector Sahin is after Murat, but never has sufficient evidence against him. One day at a police raid, he arrests Murat, but when somebody else confesses, Murat is released. Sahin begins to follow Murat and surrounds the house he stays at. Nilgun delivers a son but she dies. Murat gives the baby to Sahin before he is arrested. When Murat is released from jail, he sees that Sahin and his wife look after the boy very well. But just then, Sahin's enemies kidnap the little boy, but Murat saves him. In the end, all get happily together. Written by [email protected] 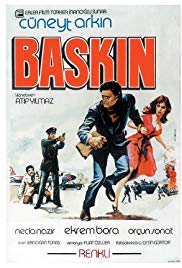