This sale is for The Plunderers (1948) starring Rod Cameron on DVD.

6.0
Director: Joseph KaneWriters: James Edward Grant, Gerald GeraghtyStars: Rod Cameron, Ilona Massey, Lorna GraySummary: In the 1870s, fugitive outlaw Johnny Drum is confronted by Sheriff Sam Borden inside a general store. Drum shoots the sheriff in front of customers Lin Conner and Julie Ann McCabe. The two women are saloon dancers and Julie happens to be the girlfriend of another wanted outlaw, Whit Lacey. He's wanted for raiding Eben Martin's mining operations. After escaping the town, Drum takes to the trail where he's followed by the sheriff deputies and their posse. He manages to elude them but he's attacked by a band of Sioux. Fortunately, Drum is aided in the ensuing firefight by bandit Whit Lacey who happened by. The two outlaws become friends and partners. They plan various robbery schemes. Lacey needs the money to move to California with his sweetheart, Julie Ann McCabe. Unknown to Lacey, Drum actually is an undercover army officer who only pretended to kill the town sheriff in order to create a cover story in his quest to find and apprehend Lacey. Eventually, Lacey finds out the truth about ... Written by nufs68
Also known as: The Plunderers (on a region-free DVD). 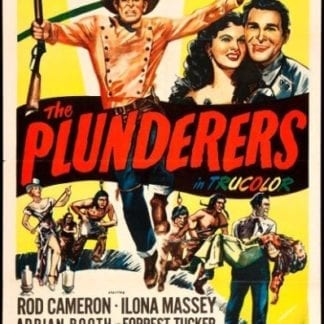