The Pirates of Central Park (2001) starring Adam Lamberg on DVD


This sale is for The Pirates of Central Park (2001) starring Adam Lamberg on DVD.

7.4
Director: Robert L. FarberWriters: Lord Dunsany, Daniel WeitzmanStars: Adam Lamberg, Jesse McCartney, Patrick J.P. DuffySummary: Once every so often, perhaps not often enough, we hear a story that captures our imagination, transports us to another place and time, and causes each of us to stop for a brief moment to reflect on ourselves, and the world we live in. 'The Pirates of Central Park,' a contemporary adaptation of the early Twentieth Century short story, 'The Pirate of the Round Pond' by Lord Dunsany, is such a story. Told through the eyes of three New York City kids whose thirst for power and adventure lead them to pursue a career as modern day pirates in the City's famous Central Park, the story poignantly contemplates the age old lesson of right versus wrong, and teach us all, young and old, that there is a high price to pay for seeking personal triumph in the malicious sinking of other people's hopes, dreams - and ships! Written by Anonymous
Also known as: The Pirates of Central Park (on a region-free DVD). 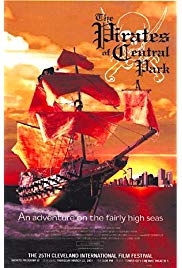