The Phantom of Morrisville (1966) with English Subtitles on DVD


This sale is for The Phantom of Morrisville (1966) with English Subtitles on DVD.

7.2
Director: Borivoj ZemanWriters: Frantisek Vlcek, Borivoj ZemanStars: Oldrich Nový, Kveta Fialová, Jana NovakováSummary: Inspector Brumpby (Jaroslav Marvan) and the young crime reporter Allan Pinkerton (Vít Olmer) attend wedding of Sir Hannibal Morris (Oldrich Nový) with beautiful Clarence (Kveta Fialová). After the ceremony, Clarence's ex-husband, criminal Manuel Diaz (Waldemar Matuska), who was believed dead, shows up in her room. He wants to get his hands on Clarence and, most importantly, on the money she would inherit in the eventuality of her new husband's death. Diaz makes attempts on Hannibal's life. He knows his way about an underground labyrinth in the château and the traps he sets up for Hannibal seem to work, since Hannibal is apparently found dead after an explosion in the labyrinth, after which his body vanishes. The inspector tries to solve the countless mysteries. In this, he is joined by Allan, always ahead of the man of the law in his estimation and judgment of the situation. Written by NFA.cz
Also known as: The Phantom of Morrisville (on a region-free DVD). 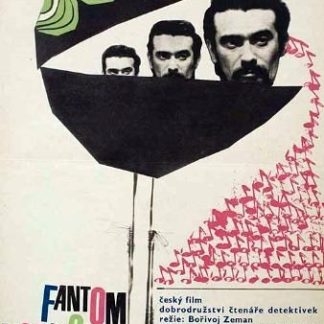