The Perfect Weapon (1991) with English Subtitles on DVD


This sale is for The Perfect Weapon (1991) with English Subtitles on DVD.

6.0
Director: Mark DiSalleWriters: David C. WilsonStars: Jeff Speakman, John Dye, MakoSummary: Jeff, a young delinquent, is enrolled by his father in a kenpo school, in the hopes of teaching the boy some self-discipline. Years later, Jeff's mentor, Kim, is being threatened by one of the Korean mafia families. Jeff tries to help his old friend, but is too late to prevent Kim's death at the hands of an unknown hitman. Vowing revenge, Jeff takes on all of the families, using his martial arts skills to find the man who killed his friend. Written by Jean-Marc Rocher <[email protected]>
Also known as: The Perfect Weapon (on a region-free DVD). 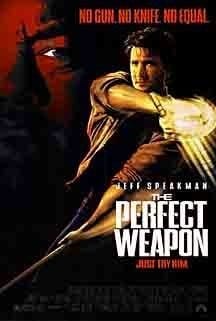