The Party’s Over (1965) starring Oliver Reed on DVD


This sale is for The Party’s Over (1965) starring Oliver Reed on DVD.

6.3
Director: Guy HamiltonWriters: Marc BehmStars: Oliver Reed, Clifford David, Ann LynnSummary: Melina is the spoiled daughter of an American industrialist. Despite being engaged to Carson who works for her father, Melina chooses to spend her days in London where she's constantly partying with her British beatnik friends. The leader of the British beatnik group she's hanging with is Moise. He has a girlfriend and also sleeps with other girls in the group but he mostly wants Melina in his bed. Maybe that's because Melina plays hard-to-get. Melina's industrialist father, Ben, is worried about her activities and sends his trusted manager and future son-in-law, Carson, to track Melina down and bring her back to the USA. When Carson arrives in London, Melina gets wind of it and avoids him, constantly running and hiding, changing her address, frustrating Carson's efforts to find her. However, Carson starts making some progress when he moves in the same apartment building as Melina and her friends. Carson also begins to hang out at the same beatnik parties as Melina and her friends. ... Written by nufs68
Also known as: The Party's Over (on a region-free DVD). 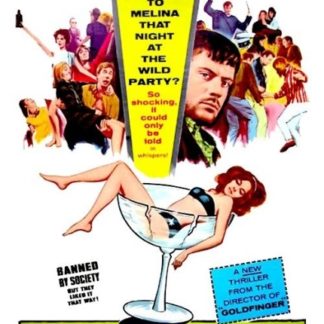