This sale is for The Jury’s Secret (1938) starring Kent Taylor on DVD.

7.3
Director: Edward SlomanWriters: Lester Cole, Newman LevyStars: Kent Taylor, Fay Wray, Jane DarwellSummary: Bill Sheldon has a grudge against Midland City newspaper publisher Brandon Williams as Sheldon blames the city's recent flood against Williams for using his power and influence to hold up government flood control money. When Williams is found murdered, Sheldon is charged with the crime that was actually committed by Walter Russell, the paper's rebel editorial writer. Ney York reporter Linda Ware arrives to cover the story and finds that Russell, her old sweetheart, is on the jury hearing Sheldon's trial. She also discovers that he is the killer. Russell forces an acquittal and, before another trial can be held, realizes that his conscience will not permit him to let Sheldon be tried again. Written by Les Adams <[email protected]>
Also known as: The Jury's Secret (on a region-free DVD). 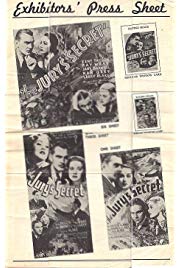