The Greek Tycoon (1978) with English Subtitles on DVD


This sale is for The Greek Tycoon (1978) with English Subtitles on DVD.

5.4
Director: J. Lee ThompsonWriters: Nico Mastorakis, Win WellsStars: Anthony Quinn, Jacqueline Bisset, Raf ValloneSummary: Theo Tomasis, from humble beginnings, is an aging Greek shipping magnate who works on his own moral (or amoral as the case may be) code, both professionally and personally, to get what and who he wants in life. The "who"s include a bevy of bed partners who don't generally include his wife, Simi Tomasis. He dotes on his son, Nico Tomasis, who he wants to follow in his footsteps in all aspects, Nico, a daredevil, especially in the air, also enjoying the high life in the process. He ends up divorcing Simi in order to marry Liz Cassidy, the grieving widow of US President James Cassidy, who was assassinated while he and Liz were walking on a beach. Liz's marriage to Theo is in part to escape the spotlight not only of being the widow of a President, but part of a high profile and powerful American political family, James' brother, John Cassidy, who was the Attorney General in James' administration. Theo had been attracted to Liz on first sight, meeting her and James when James was still a ... Written by Huggo
Also known as: The Greek Tycoon (on a region-free DVD). 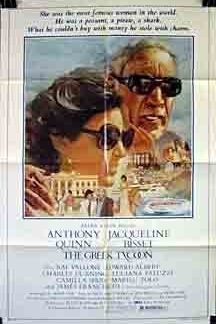