This sale is for The Forty-Niners (1954) starring Bill Elliott on DVD.

6.1
Director: Thomas CarrWriters: Daniel B. UllmanStars: Bill Elliott, Virginia Grey, Harry MorganSummary: Behind a narration in the style of Jack Webb on TV's "Dragnet", U.S. Marshal Sam Nelson, posing as Sam Smith, is sent to a gold-boom town in California to learn the identity of three killers. Posing as a gunman and killer, he soon strikes up a friendship with card-sharp Alf Billings after saving him from being lynched when caught cheating in a card game. Billings suggests they become partners as his skill with cards (overlooking the near lynching he just escaped) and Sam's ability with guns should make them a fortune. Sam agrees, hoping that Billings will lead him to the men he is hunting. Billings leads him to Coldwater sheriff William Norris and Ernie Walker, Norris's partner in a saloon and gambling operation, both implicated in the murder case Sam is investigating. Written by Les Adams <[email protected]>
Also known as: The Forty-Niners (on a region-free DVD). 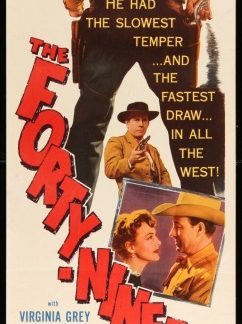