This sale is for The Divorcee (1969) starring Marsha Jordan on DVD.

4.5
Director: Stephen C. ApostolofWriters: Stephen C. ApostolofStars: Marsha Jordan, Marlon Proctor, Deborah DowneySummary: Although she doesn't want to separate from Hank after he catches her in the act with another woman, Betty, a young divorcée, keeps having sex with almost every man she goes out with, including her lawyer, her best friend's husband, her neighbour, and a barman. During a psychodrama session at a party, she confesses her sexual adventures and fantasies, and soon, the party begins to resemble some of the "adventures" she was talking about.
Also known as: The Divorcee (on a region-free DVD). 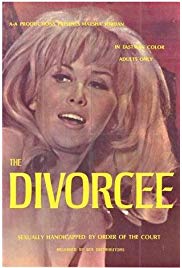