The Curse of Doctor Wolffenstein (2015) with English Subtitles on DVD


This sale is for The Curse of Doctor Wolffenstein (2015) with English Subtitles on DVD.

5.0
Director: Marc RohnstockWriters: Marc RohnstockStars: Mika Metz, Isabelle Aring, Robin CzernySummary: Dr. Victor Wolffenstein, a genius and at the same time devilish doctor, has set himself a huge goal, he wants to become immortal. In the Year 1930, in a small village and with the help of scientific experiments and occult rituals, he brews a serum (POTION), which is supposed to help him achieve his goal. But the Serum has an unwanted side effect, he becomes immortal but has to pay a huge price, he becomes infected with necrosis, through which his limbs start to rot and the only thing left for him to do is to replace his body parts. Dr. Wolffenstein recklessly starts to harvest limbs from the other villagers; he mutilates and kills with no remorse. The villagers don't put up with this kind of the devil's work! An angry mob overpowers the Doctor in his office, kidnaps him and buries him alive. More than 80 years later, five teenagers are on their way to the biggest Rave party of the year. On their way they get stranded in a small village, due to a car accident, now they have to wait for... Written by Lars Rohnstock
Also known as: The Curse of Doctor Wolffenstein (on a region-free DVD). 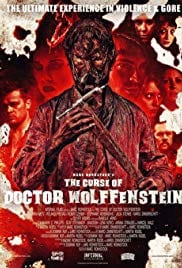