This sale is for The Conqueror (1956) starring John Wayne on DVD.

3.6
Director: Dick PowellWriters: Oscar MillardStars: John Wayne, Susan Hayward, Pedro ArmendárizSummary: In ancient times, the Mongolian warlord Temujin must do battle against the rival tribe that killed his father. The battles pale in comparison with Temujin's home life, as he attempts to woo the heart of the red-haired Tartar prisoner Bortai whom he has captured in a raid. He must also deal with various intrigues within his palace. Eventually, Bortai falls to his manly charms, Temujin defeats his enemies within and without, and is crowned Genghis Khan. Written by <[email protected]> 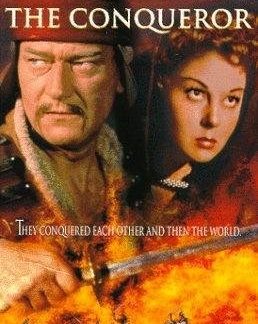