This sale is for The Color of Love: Jacey’s Story (2000) starring Gena Rowlands on DVD.

6.5
Director: Sheldon LarryWriters: Nancey SilversStars: Gena Rowlands, Louis Gossett Jr., Penny FullerSummary: Louis Gossett, Jr. and Gena Rowlands find themselves in a dispute over the custody of a young adorable bi-racial girl, who just happens to be their grandchild. The child's (Jacey's) parents are Gossett's son and Rowland's daughter, and have died in a tragic accident leaving the granddaughter's custody up in the air. Both grandparents want custody, but Rowlands is an older Southern woman who still easily sees the difference between black and white, and it is deeper than just skin color. Gossett is also older and not without his preconceived notions of whites either, but together, they get to know each other as people, not stereotypes, through the love of a grandchild. Written by India Mitchell
Also known as: The Color of Love: Jacey's Story (on a region-free DVD).

Be the first to review “The Color of Love: Jacey’s Story (2000) starring Gena Rowlands on DVD” Cancel reply 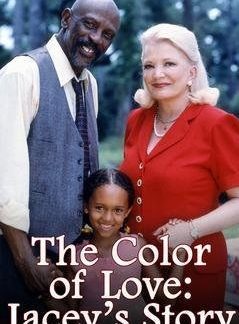