The Chechahcos (1923) with English Subtitles on DVD


This sale is for The Chechahcos (1923) with English Subtitles on DVD.

6.5
Director: Lewis H. MoomawWriters: Lewis H. MoomawStars: William Dills, Albert Van Antwerp, Eva GordonSummary: A fire engulfs a shipload of prospectors and adventurers making their way to Alaska. In the confusion, Mrs. Stanlaw is separated from her young daughter, who ends up in the care of 'Horseshoe' Riley and Bob Dexter. Mrs. Stanlaw is told by gambler Richard Steele that her daughter is lost. Flash forward 10 years; Riley and Dexter are running a prosperous gold mine, and Steele has just come to town to run the local saloon. Ruth, meanwhile, has grown into a beautiful young woman, and finds herself falling in love with Dexter. Between Steele sending his henchman Pierre to kill Dexter, Dexter discovering that Steele tried to kill him on the ship, and the reunion of Mrs. Stanlaw and Ruth, there's plenty of drama even without the dramatic Alaskan scenery, including the majestic glaciers. Written by Jon Reeves <[email protected]>
Also known as: The Chechahcos (on a region-free DVD). 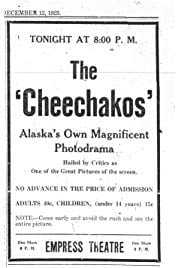