This sale is for The Case of the Red Monkey (1955) with English Subtitles on DVD.

5.8
Director: Ken HughesWriters: Eric Maschwitz, James EastwoodStars: Richard Conte, Rona Anderson, Russell NapierSummary: Several murders of nuclear scientists, that baffles Scotland Yard, occur in London about the same time that Bill Locklin, a special officer from the United States State Department, arrives to oversee the transfer of Professor Leon Dushenko, a Russian scientist who as fled the U.S.S.R. An attempt is made on Dushenko's life with a monkey's paw-print found at the scene. Newspaperman reporter Harry Martin is covering the story. Duskenko is moved secretly to a nursing home, while Locklin stumbles onto the hideout of the gang behind the killings. He is captured along with Julia Jackson, niece of Superintendent John Harrington. Locklin is tortured to reveal Dushenko's hiding place but escapes in time to avert Duskenko's murder at the hands of the gang's hired-killer---a midget who is aided by a monkey. Written by Les Adams <[email protected]>
Also known as: The Case of the Red Monkey (on a region-free DVD). 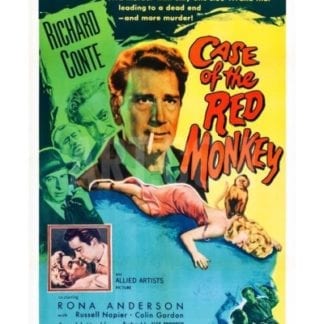