This sale is for The Carson City Kid (1940) starring Roy Rogers on DVD.

6.2
Director: Joseph KaneWriters: Robert Yost, Gerald GeraghtyStars: Roy Rogers, George 'Gabby' Hayes, Bob SteeleSummary: Roy Rogers (Roy Rogers, and not playing "himself" but playing a character named Roy Rogers), posing as The Carson City Kid, is seeking vengeance on Morgan Reynolds, the man who killed his brother. To find Reynolds in the gold towns, he systematically stops stagecoaches and goes through the mail, hoping to find letters addressed to Reynolds and thusly learn his whereabouts. Thus "The Kid" earns the reputation of a stagecoach robber, although he never takes anything, and the reputation is enhanced by the fact that he travels with Laramie (Francis McDonald), a notorious half-breed outlaw. A posse is about to capture them and Roy rides back to get Laramie whose horse has been shot, and Laramie repays the favor by slugging Roy and escaping on his horse Trigger. The posse rides by the unseen Roy and captures Laramie and, since he is riding the "Kid's" horse, take him to jail as being the "Kid." Laramie denies this and is told he will be free when he identifies the "Kid"; othewise he will ... Written by Les Adams <[email protected]>
Also known as: The Carson City Kid (on a region-free DVD). 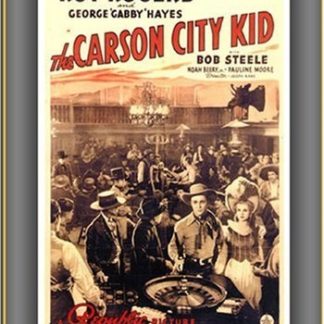