This sale is for The Big Street (1942) starring Henry Fonda on DVD.

6.5
Director: Irving ReisWriters: Leonard Spigelgass, Damon RunyonStars: Henry Fonda, Lucille Ball, Barton MacLaneSummary: Little Pinks is in love with a nightclub singer named Gloria. But it is a unrequited love as she does not know that he exists. Pinks is a shy busboy and Gloria only goes out with men who are loaded. When she tries to dump Case for richer Reed, Case dumps her down the stairs. After months of treatment, she will never walk, but Pinks is the only one who takes care of her. He pays all her bills and sends her flowers with unsigned cards. But to Gloria, he is nothing in her eyes. When she wants to leave New York for Florida, to be with the money set, he takes her. Written by Tony Fontana <[email protected]>
Also known as: The Big Street (on a region-free DVD). 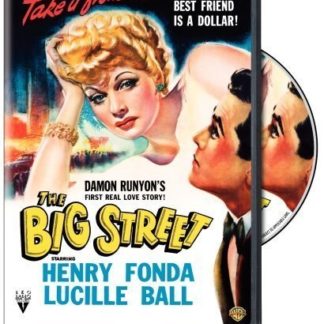