The Big Fix (1978) with English Subtitles on DVD


This sale is for The Big Fix (1978) with English Subtitles on DVD.

6.3
Director: Jeremy KaganWriters: Roger L. SimonStars: Richard Dreyfuss, Susan Anspach, Bonnie BedeliaSummary: In Los Angeles, Moses Wine, who was part of the counter-culture of the late 1960s at UC-Berkeley, still has those radical feelings but no longer does anything about them. His wife Suzanne, who has transformed from a 1960s hippie to a 1970s new-ageist, divorced him when his law school background didn't materialize into the upper middle class liberal life she was expecting, she having sole custody of their two young sons, with Moses having visitation rights. Moses fell into work as a private investigator of the gumshoe variety, which usually doesn't cover his monthly child support payments. After not seeing her for ten years, Moses is contacted by Lila Shea, an old girlfriend from Berkeley, to do some investigative work on behalf of her boss, Sam Sebastian, the Southern California coordinator for the gubernatorial campaign of Congressman Miles Hawthorne. Lila felt Moses would be well suited to the job because of running within "the" crowd at Berkeley, even if only knowing the main ... Written by Huggo
Also known as: The Big Fix (on a region-free DVD). 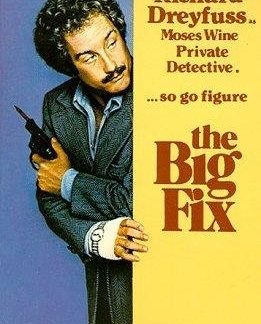