The Beast That Killed Women (1965) starring Judy Adler on DVD


This sale is for The Beast That Killed Women (1965) starring Judy Adler on DVD.

2.9
Director: Barry MahonWriters: Clelle MahonStars: Judy Adler, Juliet Anderson, Janet BanzetSummary: Panic and fear strike the hearts of the carefree sunbathers in a once peaceful and popular nudist resort in sun-bleached Miami, when a mysterious, yet menacing intruder manages to find his way in the camp. Inconspicuously, taking cover in the thick foliage and hiding effortlessly in the pitch-black and almost shapeless shadows, the grotesque and powerful perpetrator will eventually kidnap a helpless woman in the still of the night, and after a brief fight, he will pitilessly take her life. Could a sex maniac be responsible for the poor woman's gruesome death? As the Miami Police launch a full investigation, taking into account a lucky survivor's statement while the killer is still on the loose, the terrorised sun-kissed nudist girls will keep on screaming for help during the nights. How could one lure the blood-stained adversary out of his hideaway? Written by Nick Riganas
Also known as: The Beast That Killed Women (on a region-free DVD). 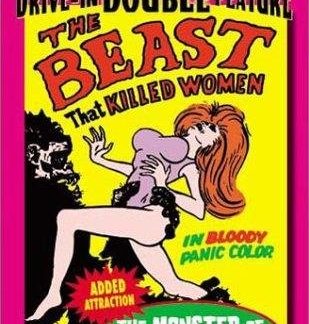