This sale is for Teenage Bride (1974) starring Colleen Brennan on DVD.

4.9
Director: Gary TroyWriters: Dick Rowden, Ron RogersStars: Colleen Brennan, Don Summerfield, Cyndee SummersSummary: College dropout Dennis arrives to stay over at his stepbrother Charlie's house. With Charlie and Sandy's marriage falling apart, Charlie prefers to visit his buxom nudist mistress Marie. As she wants Charlie for herself, Marie wants him to tape Sandy seducing Dennis. Meanwhile, bra-less Sandy really does invite Dennis to bed. Charlie finds a private detective who is preoccupied by his secretary Betty. Afterwards, Charlie's own secretary Abigail invites him home. Meanwhile, Dennis confronts Marie, but she seduces him. As Marie lives in the same street as Charlie, the private detective accidentally tapes her and Dennis. Written by Anonymous
Also known as: Teenage Bride (on a region-free DVD).
Source: imdb.com 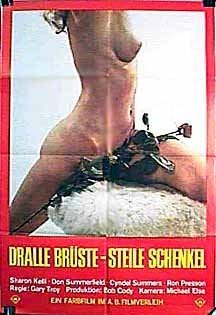