This sale is for Tarzan, the Ape Man (1959) starring Denny Miller on DVD.

3.9
Director: Joseph M. NewmanWriters: Robert Hill, Edgar Rice BurroughsStars: Denny Miller, Cesare Danova, Joanna BarnesSummary: This movie has little connection with the 1932 original. It does, however, have lifted footage (tinted to more-or-less match the color), including obvious footage of Weissmuller's vine-swinging. Miller is not once called Tarzan in the movie, and his yell is also lifted Weissmuller. The elephants who wreck the pygmy village are lifted/tinted from the original, but the "pygmies" (real in the original) were kids from Fairfax High School in Los Angeles. Costumes are left over from "King Solomon's Mines" so that more stock footage could be lifted. And the crocodile fight is taken from "Tarzan and his Mate" Written by Ed Stephan <[email protected]>
Also known as: Tarzan, the Ape Man (on a region-free DVD).

Be the first to review “Tarzan, the Ape Man (1959) starring Denny Miller on DVD” Cancel reply 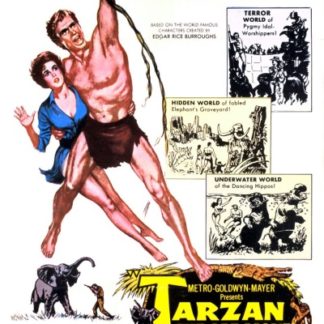