This sale is for Target Zero (1955) starring Richard Conte on DVD.

5.9
Director: Harmon JonesWriters: James Warner Bellah, Sam RolfeStars: Richard Conte, Peggie Castle, Charles BronsonSummary: In 1952, during the Korean War, a United Nations relief worker's jeep comes under enemy fire and overturns in a ditch. Hours later, the worker, Ann Galloway, is found and rescued by a British tank patrol. The front lines being very fluid and constantly changing send people into frequent advances and retreats. The British tank patrol is attempting to find its main unit. Eventually it runs into an American infantry patrol, under the command of Lieutenant Tom Flagler and his sergeant, Vince Gaspari. The Americans have a wounded man on a stretcher. They suggest a certain path toward the American lines and the location of their Easy Company, on a fortified hill top. The British agree to follow the Americans. They also pick-up an American two-man mortar team that is lost. Together they head for the hills. One the way, they run into a North Korean ambush, a destroyed village, a minefield and other perils. They manage to ambush a Communist truck convoy and capture the convoy's fuel, food and ... Written by nufs68
Also known as: Target Zero (on a region-free DVD). 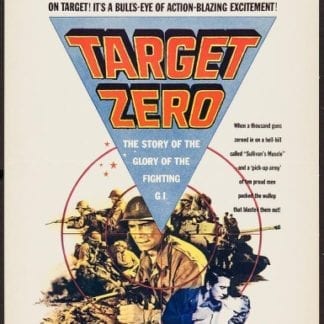