6.0
Director: Tim WhelanWriters: Matt Brooks, Joseph HoffmanStars: Kay Kyser, Marilyn Maxwell, William GarganSummary: Lowell Blackford (Kay Kyser) is blessed with a gift of music,but also cursed with a hereditary "evil eye" which hypnotizes people,and he is virtually a recluse. He goes in search of a Broadway publisher for a symphonietta he has written, and ends up crashing an audition at the Swing Publishing Company, where he meets torch singer Ginger Gray (Marilyn Maxwell) and her fiance and promoter, Waltzy Malone (William Gargan). Ginger accidently walks off with his music and he follows her to a gym where Waltzy's fighter, "Killer" Kennedy (Nat Pendleton), has just been kayoed by his sparring partner. Waltzy learns of Lowell's hypnotic power and believes that Kennedy can win the championship if Lowell uses his power against the champ. He arranges for Lowell to lead the band at the club where Ginger sings. The latter objects to the role she is to play in getting Lowell to use his "evil eye" but Waltzy persuades her to go along by telling Lowell that Kennedy is her brother and it means everything ... Written by Les Adams <[email protected]>
Also known as: Swing Fever (on a region-free DVD). 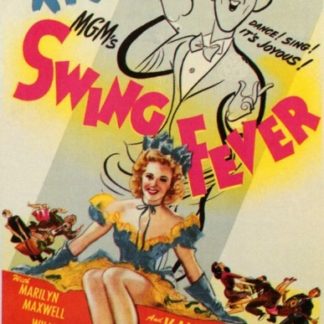