This sale is for Sudden Death (1995) starring Jean-Claude Van Damme on DVD.

Director: Peter HyamsWriters: Karen Elise Baldwin, Gene QuintanoStars: Jean-Claude Van Damme, Powers Boothe, Raymond J. BarrySummary: Darren McCord takes his two kids to a Pittsburgh Penguins National Hockey League play-off game, unknowing that the sports arena has been taken over by terrorists, who are holding the Vice President of the United States, as well as many other high-ranking officials hostage. Darren later becomes the only one who is aware of the situation. And, the stakes are raised when the terrorists announce that they will blow-up the building at the end of the game. Therefore, Darren must not only subdue the terrorists, but postpone the game and send it to overtime. Written by Anonymous
Also known as: Sudden Death (on a region-free DVD). 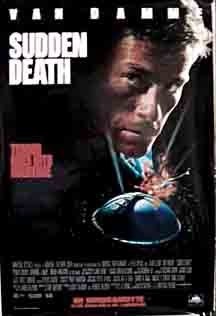