This sale is for Suburban Commando (1991) starring Hulk Hogan on DVD.

Director: Burt KennedyWriters: Frank A. CappelloStars: Hulk Hogan, Christopher Lloyd, Shelley DuvallSummary: Shep Ramsey is an interstellar hero, righting wrongs, et cetera. His ship is damaged after a fight with an interstellar nasty, and he must hide out on Earth until it can recharge. He leaves his power suit at home, but still finds himself unable to allow wrongs to go unrighted, and so mixes it up with bad drivers, offensive paperboys, muggers and the like. Then the family, with which he's staying, finds his power suit, and the father tries it on. Written by John Vogel <[email protected]>
Also known as: Suburban Commando (on a region-free DVD). 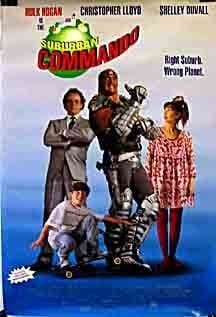