This sale is for Strip Search (2004) starring Austin Pendleton on DVD.

6.3
Director: Sidney LumetWriters: Tom FontanaStars: Austin Pendleton, Tom Guiry, Fred KohelerSummary: In the aftermath of the September, 11th, in China, the American student Linda Sykes is interrogated by the military Liu Tsung-Yuan. In New York, the Arab student Sharif Bin Said is interrogated by the FBI agent Karen Moore. The psychological methods of interrogation are the same, amicable in the beginning and brutal in the end; but there is no evidence that the students are terrorists. Must security and safety of the State come at the price of freedom? Written by Claudio Carvalho, Rio de Janeiro, Brazil
Also known as: Strip Search (on a region-free DVD). 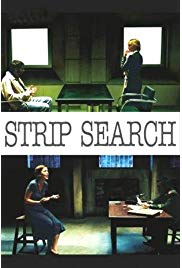