This sale is for Special Delivery (1976) starring Bo Svenson on DVD.

6.0
Director: Paul WendkosWriters: John Melson, James Edward GrantStars: Bo Svenson, Cybill Shepherd, Mel ScottSummary: A gang of thieves plan a daring bank robbery, making their escape across the rooftops of Los Angeles. The police are quickly called in, however, and only one of the robbers, Murdock, makes a clean getaway. Unfortunately, in order to do so, he is forced to dump the stolen cash into a mailbox, which he then finds is locked until midnight, forcing him to wait until the mailman makes his late night pickup. As he waits, he discovers that his hiding place has been observed by several other people, all of whom want a share of the loot. Written by Jean-Marc Rocher <[email protected]>
Also known as: Special Delivery (on a region-free DVD). 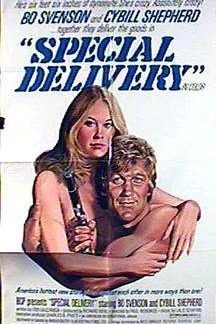