This sale is for Son of Svengoolie (1978–1986) starring Rich Koz Best of Collection on  1 DVD (not the series).These DVD’s will play on any DVD player anywhere in the world (Region Free).

6.1
Stars: Rich Koz, Jerry G. Bishop, Doug ScharfSummary: Weekly Television show that originally aired on WFLD 32 in the Chicago area (and originally went by the name "Son of Svengoolie", having been spun off of the original series "Screaming Yellow Theatre" with Jerry G. Bishop as Svengoolie). Starring young wisecracker Rich Koz, the show was an immediate cult favorite, sort of a Dr. Demento of TV, airing multitudes of low budget Sci-Fi and Horror movies, sometimes with Koz's wisecracks and various sound effects thrown in. Temporarily suspended in 1986 when Rupert Murdoch bought WFLD 32 and made it into the current day FOX network, it subsequently found a home on Chicago Cable/UHF station WCIU, where it airs to this day (2003). Written by Matlock-6
Also known as: Son of Svengoolie (on a region-free DVD). 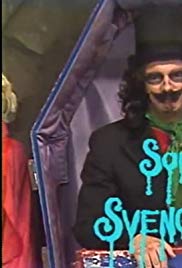