Son of Samson (1960) with English Subtitles on DVD


This sale is for Son of Samson (1960) with English Subtitles on DVD.

5.3
Director: Carlo CampogallianiWriters: Oreste Biancoli, Ennio De ConciniStars: Mark Forest, Chelo Alonso, Vira SilentiSummary: During the Persian rule over Egypt (circa 525-480 B.C.), the young prince Kenamon uses to wander about, and mixing with the poor people. Once, he finds himself in a life threatening situation, and is saved by a strong man, Maciste. In another occasion, he sees a beautiful girl, Nofret, and falls in love with her. He talks with his father the Pharaoh Amirteo I, about being much impressed with the hunger and miserable living conditions of the people. His father decides to raise an army against the Persians, but his beautiful but cunning wife Smedes, godmother of Kenamon and allied of the Persian Gran Visir, kills him before he acts. Once on the throne of Pharaoh, Kenamon is drugged with a substance prepared by Smedes, and loses his will-power. Meanwhile, Nofret is about to be sold as slave. Maciste becomes the leader of the people's revolt, and is acclaimed at the the local games. Maciste gets Nofret free, manages not to fall under Smedes' love filters, and gathers and leads a ... Written by Artemis-9
Also known as: Son of Samson (on a region-free DVD). 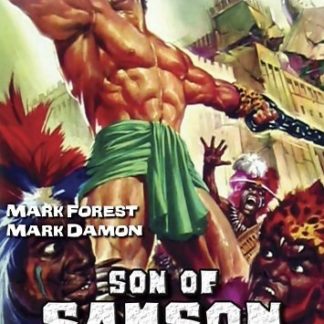